I’ve barely put pen to paper of late. With the exception of erotica focusing on a wealthy man’s desire to have sex with affordable furniture, my river of prose has dried to a thin trickle, heavy with the silt of creative dread and peppered with the gasping fish of shabby metaphors. There’s also The Horse of Long Sentences having a drink. Probably.

In an attempt to dislodge the waxy buildup that’s developed around my thinkmeat, I decided that writing a quick blog post might be a smart idea. It will, at the very least, give the spambots something new to look at. 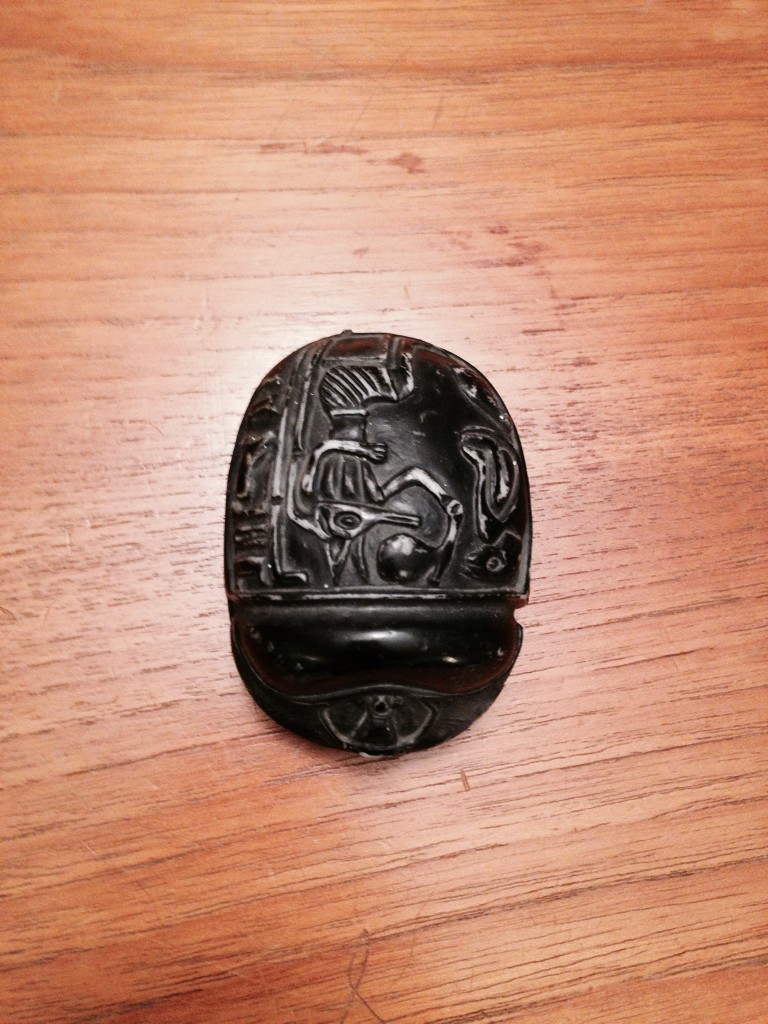 There it is. The bastard.

Several years ago, my Father bought me a scarab for Christmas. A resin-moulded piece of tat from the sort of store that sells Tupperware next to car batteries next to themed-pyjamas, each and every item more flammable than the last. A warehouse full of junk on the outskirts of Coventry: exactly the kind of place that makes my Pa’s eyes widen like a besotted anime schoolgirl.

At this point I want to make it clear that I’m not an ungrateful brat. I didn’t throw a tantrum or lock myself in my room or anything awful like that. I was, at most, slightly puzzled. Never before had I professed any specific interest in ancient Egypt, beetles or the intersection thereof, and so it’s fair to say that this gift came somewhat out of left field.

“Thank you, Dad. It’s…It’s a decorative scarab beetle. Just what I always wanted.”

Christmas then lapsed into the usual blur of food, booze and simmering resentment between disparate branches of the clan. The scarab, however, continued to baffle me.

Three months later, it was my Father’s birthday.

Like any doting son, I wanted to give him something meaningful. Something important. A little piece of me for him to carry wherever he went.

Of course I gave him the fucking scarab.

He laughed. He called me a daft sod. It was war.

A month later, it was my birthday.

The scarab was passed back and forth in an increasingly unlikely series of guises. I was in university at the time, so my options were limited to clever shipping ruses and stealing frantic moments back at home to tuck the scarab somewhere out of the way, hopefully to be found long after I’d returned to halls.

It found itself in expensive watch boxes for birthday presents, hidden in the inside of cakes, secreted away in light fittings and mugs and jacket pockets and anywhere else that it could lay undisturbed until almost forgotten.

“Have you checked the oil in your car, Guy?”

Four hours later, I’m in Kent. I open my bonnet to make sure all is well, and what do I find gaffer taped to a moderately key part of the engine? Yup. The sodding, rotten, bastard scarab.

It’s become a point of pride.

Any visit to my parents. Any time we meet. Any of my shows that they see or family funerals I attend, we’re both on edge. Was that affectionate hug used to mask a sly pocketing? Has that jar of jam been opened and re-sealed, just waiting for me to encounter the telltale resistance of a condom-wrapped, resin-moulded dung beetle? The threat of the scarab now looms over all all familial interaction.

There is nothing quite like driving your car, reaching down down for a tissue only to feel the unmistakeable contours of a tiny defeat. This tends to be accompanied by me screaming at the top of my lungs, raging against god and man as my passengers – largely uninitiated in the ways of the scarab – look on with horror, firm in the belief that their driver is undergoing some deep psychotic breakdown.

The last time I found the scarab, I was walking to work the day after a gig. We’d all had a lovely time and I was feeling somewhat worse for wear on my office-bound trudge. As I put my hands in my pockets to keep warm/complete the look of sullen despondency, my fingers brushed a familiar shape. I stood stock still.

Gradually it hit me. My little brother had been to the gig. My Father had roped in family members to act as his mules, a sinister chain gang of subterfuge and secrecy. I felt like a colossally underwhelming spy. A 6’4″ Mata Hari with an overdraft and a career in admin.

My parents take a rare holiday. Of course, my first action is to post the scarab to my Grandfather, with explicit instructions to place this totem of stubbornness slap bang in the middle of the hallway, ready to greet my freshly-sunned Ma and Pa.

The fear sets in.

What if it’s lost? What if it’s damaged? What if some black-hearted Royal Mail creature just straight up decided to throw away a chunk of mail? Some vast sacrifice to the Thanatos of logistics. I was close to tears. This piece of tat, this shabbily-painted, industrially-produced hunk of resin means more to me than any other material possession. I’d sacrifice everything I own for the scarab, this sign of family and foolishness and invention. I couldn’t bear to be without it.

Thankfully, it soon arrived. It was placed by my Grandfather and, you’ll be pleased to know, it perplexed the buggery out of my Father.

This brings us to today.

I’ve gone over the festive gifts from my folks with a fine toothed comb and I am reasonably, reasonably, sure that the scarab hasn’t been hidden away somewhere, even if it did require me to eat half a jar of Edinburgh rock to put my fears to rest. 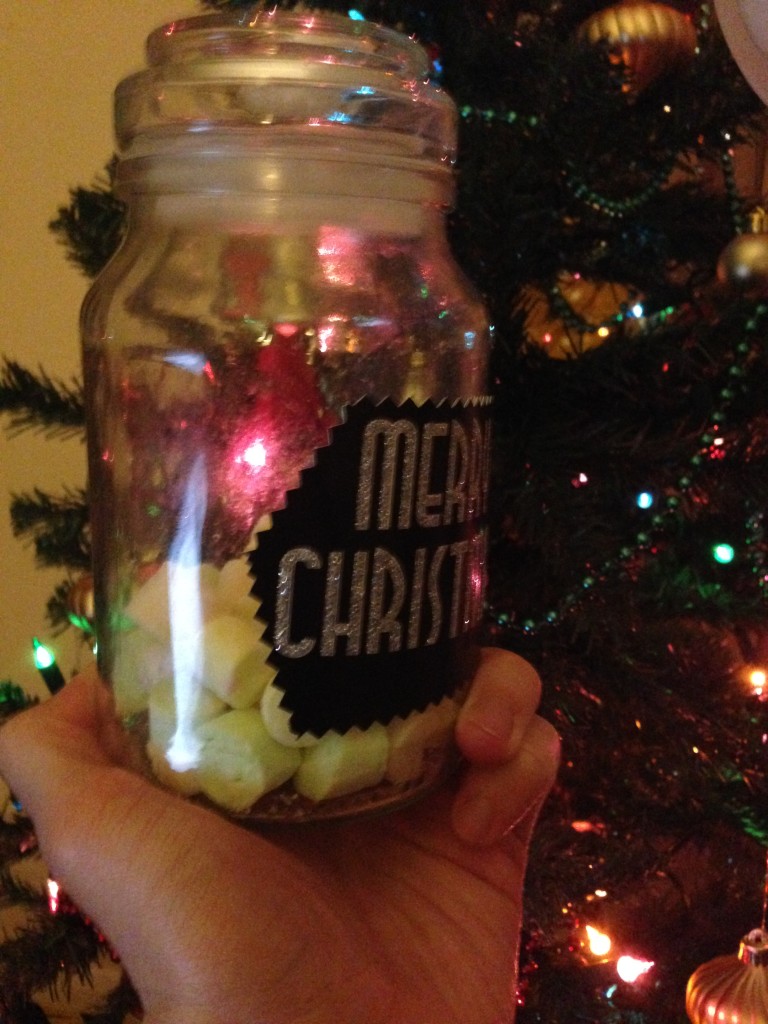 Edinburgh Rock. Not pictured: The Scarab

The scarab is with my Father. As it should be.

It’s been in light fittings, ceiling voids, pillow cases, cakes, jars, mugs, pots, ponds, trees, cars, shoes, clothes and a host of other cunning and not so cunning nooks and crannies. Nothing is off limits. The game is all.

This does, however, raise one rather big question.

My father is 70 in March. Every time I see him I’m surprised at the toll that time has taken. Thick, black hair has become gray and thin, strength has faded and all these tiny signs that your parents are as fragile and scared and human as you are have started to show.

It’s not like my family holds death and burial as sacred.

It wouldn’t be a great transgression to pop it into the coffin once the poor old bastard’s popped his clogs. In fact, I’ve told him that I plan to. I want the last laugh. I want to know that the fucker has the scarab and by god it’s not coming back to me.

I’d  dearly love to keep it. I want it as a memory of my Father when he leaves us, something to show my children and say “Look, Grandad Kelly was a silly sod too.”

Hell. Maybe I’d give it to one of my own children for Christmas and the cycle could continue.

But that would mean that he’d won.

I don’t think I can allow that. 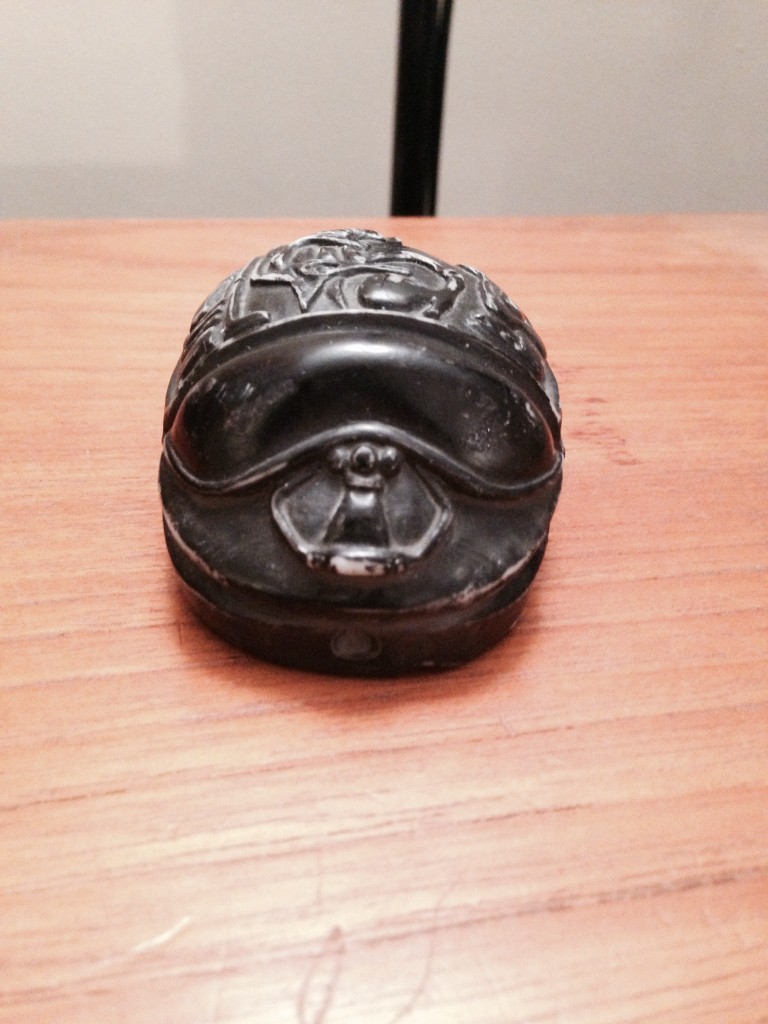 2 Responses to The Scarab